Top Talent brings to the world ‘The Fabulous Red Diesel’ 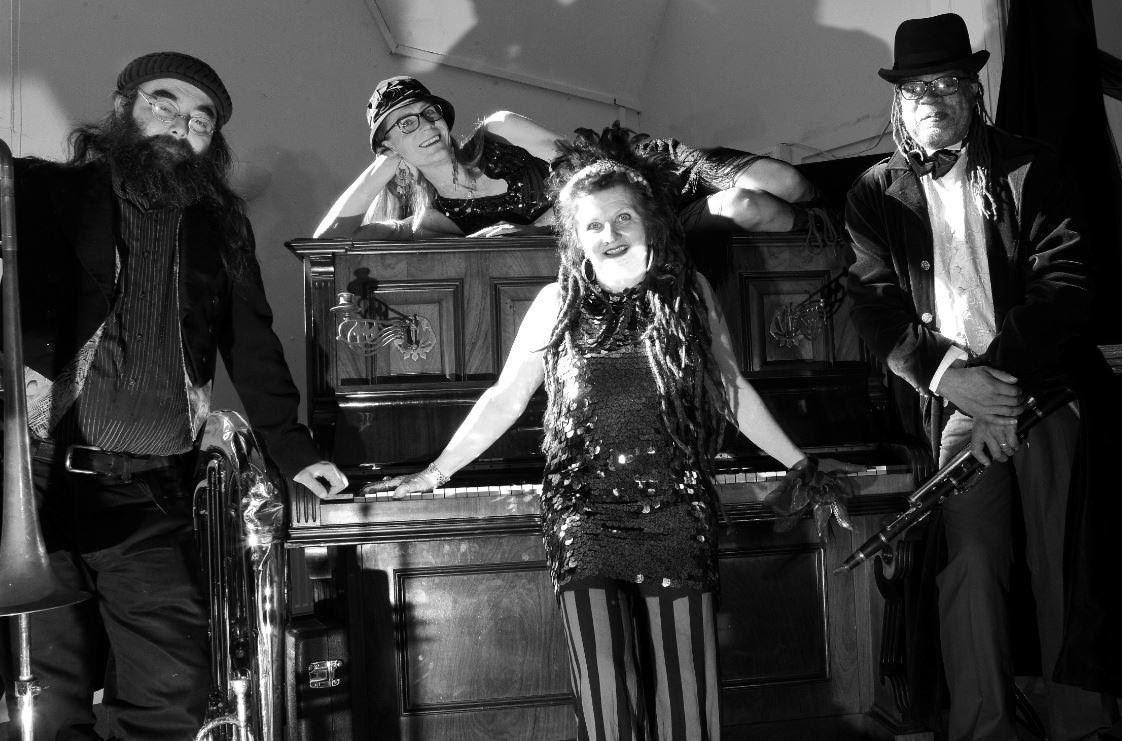 The Fabulous Red Diesel wowed audiences and critics alike with their last single, Butterfly Mind, being playlist by Jazz FM for six weeks running and their new single, Nellie Gale, looks set to grab even more attention, telling the tale of the titular character – one of the first nude dancers in the West End! Nellie Gale was the great grandmother of Fabulous Red Diesel matriarch and singer, Ms Kitty, and, so the family legend goes, was a Windmill Girl – a performer at the Windmill Theatre, the revue theatre in London which took inspiration from the Moulin Rouge and brought censor-baiting nude art to the masses! Cheeky, fascinating and irresistible, Nellie Gale is the human embodiment of Fabulous Red Diesel’s wonderful world!

“The video is a very cheeky black and white romp through the story,

A husband and wife on vocals and drums; a transgender trumpeter and double-bassist; and a synth player and guitarist named Rabbi Jaffa Delicious, The Fabulous Red Diesel are a band like no other. Ms Kitty (Kat Lee-Ryan) on vocals, keys and flute; Duke Boom (husband, Will Lee-Ryan) on drums; Miss Bea-Have (Beatrice Gullick) on double bass, tuba and trumpet and Rabbi Jaffa Delicious (Simon Dobell) on guitar and trumpet. Based in Hastings, they have built up a loyal fanbase, not only through their live shows which have seen them supporting and playing alongside the likes of The James Taylor Quartet, Skunk Anansie and Jeff Buckley but also their unique sound, fusing classic 60s soul with jazz arrangements and a rhythm section which can skip from hip-hop beats to Latin to funk. The Queensbury House Sessions is their new album, sixteen extraordinary tracks, each recorded in just one take at a disused office block (called, yes, Queensbury House) to truly capture their live sound.

Although defiantly upbeat and circus-like in their approach to entertaining audiences, Kat’s own life has been touched by tragedy, her sister taking her own life in 2006. As part of the grieving process, she wrote and developed a stage show called Sparkly Bird which has gone on to sell-out theatres as well as educate audiences about mental health at universities and for the NHS. With songs written by Ms Kitty and the music, of course, performed by The Fabulous Red Diesel (and with aerial performances, a narrator and dance), it’s yet another side of a collective who mix their ideas and personalities with real passion, flair and invention. The Queensbury House Sessions are mixed and mastered by Nick Endcott Gibb. A specially filmed presentation of Sparkly Bird can be experienced at this year’s Brighton Fringe, the largest festival of its kind outside of Edinburgh.